executive producers of “Agents of SHIELD”, Jed Whedon and Maurissa Tancharoen, who also co-write the pilot, talked about the challenges in adapting the Marvel universe on a tight TV budget while paying attention to the rules and guidelines that Marvel has set.

What are the biggest challenges in adapting the Marvel universe on a TV budget?

TANCHAROEN: It’s a challenge, but what we are doing is just looking at it through a different lens. We are telling more stories within that extraordinary universe. Coulson is the human face in all the movies you’ve seen. So, now he has a team of real people who don’t have superpowers, but they’re skilled in their own way and they’re dealing with this extraordinary world.

WHEDON: The movies each follow someone who has some crazy power. They’re thrilling, and they cost many, many monies. But, we feel like you can relate to the human aspect. It’s hard to relate to a guy who’s a God because he’s a God. We feel you can relate, in a different way, to the humans on the ground, in a world where these people exist. The Battle of New York happened. We saw aliens come out of the sky. So, the world has changed. What is it like to be a real person with no superpowers, in a world where people do have those powers? We think those are compelling stories to tell.

There are all sorts of rules in place. There are different properties owned by different people, and there’s stuff that they have slotted away for features.

Did Marvel set any specific rules or guidelines for characters or plotlines that you couldn’t touch?

TANCHAROEN: Yes! It’s Marvel, so there are many rules.

WHEDON: There are all sorts of rules in place. There are different properties owned by different people, and there’s the stuff that they have slotted away for features. The whole process is ongoing, in terms of, “Here’s a story we want to tell? How can we tell it? What’s our framework?” But within that framework, there’s so much that it doesn’t limit us, in any way. It’s more about where the out of bounds is, so we can move the ball down the field.

Will there ever be any costumed characters showing up on the set?

TANCHAROEN: Sure, yes. It’s not off-limits. It’s not just a spy show. We’re hoping to do a little bit of everything. 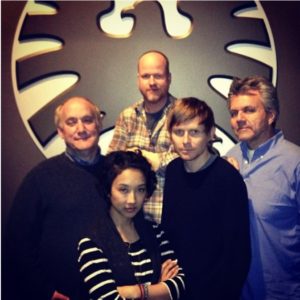 How far ahead have you plotted your story arc?

WHEDON: We’ve got some ideas, down the road. We have a season mapped out, and a second season concept.

TANCHAROEN: We just started shooting Episode 2, two days ago, and got taken away from it to come here.

WHEDON: We have a lot of cool things planned. We’re pretty excited about where it’s going.

For more information regarding Mcdonalds Mcdvoice survey use mcdvoices.us

You can get all Mcdvoice resources there.